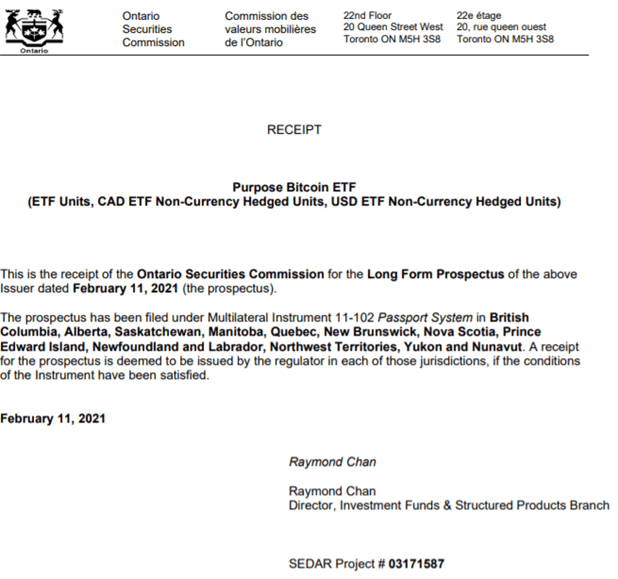 The time has come for the first North American Bitcoin (BTC-USD) ETF, it has been approved by Canadian Securities Regulator. The Calgary-based firm Accelerate Financial Technologies has filed and obtained a receipt for a preliminary prospectus with Canadian Securities Regulator for the Accelerate Bitcoin ETF (ABTC).The primary purpose and function of the Bitcoin exchange traded fund will be to mirror the behaviors of Bitcoin minus all fees related to the fund. The ETF is expected to be listed on the Toronto Stock Exchange but that has yet to be officially confirmed. In accordance with a decision document approved yesterday February 11th, 2021 by the Ontario Securities Commission it will cover multiple jurisdictions. The territories will include British Columbia, Alberta, Saskatchewan, Manitoba, Quebec, New Brunswick, Nova Scotia, Prince Edward Island, Newfoundland and Labrador, Northwest Territories, Yukon and Nunavut. See document below:Well, the Canadians have broken down the barrier for the cryptocurrency